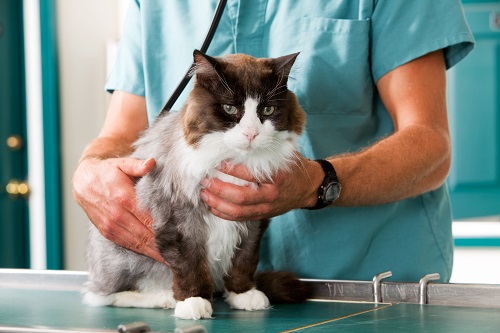 Hyperthyroidism refers to an overactive thyroid gland. The thyroid gland can be considered the engine room of the cat’s body, which is responsible for the metabolism in the body and responsible for determining the speed at which all processes in the body works. It is an important part of the endocrine or hormonal messenger system in the body and affects all the organ systems including the liver, kidneys, heart, nervous system, intestines and even the skin. The primary hormone produced by the thyroid gland is thyroxin also referred to as T4 hormone. It is the overproduction of this hormone that causes hyperthyroidism. The thyroid gland is situated at the beginning of the windpipe just behind the throat in the upper part of the cat’s neck and consists of two main lobes linked together. Thyroxin or T4 is inactive when released, and is transformed into a biologically active form, T3, or otherwise called iodothyronine.

Hyperthyroidism is considered one of the most common hormonal diseases in cats and is a hormonal condition which occurs less commonly in dogs. It occurs mainly in older cats with the onset of the condition usually between 7 and 14 years of age. There is no sex predilection although some sources believe it to be more common in females. It can be caused by either a benign (non-cancerous) change in the glands or seldom by a malignant or cancerous change in the form of an adenocarcinoma of the thyroid gland.

The first and most common symptom you will notice is weight loss. These cats can become extremely thin while still having a ferocious appetite. You may also notice that your cat tends to be more hyperactive and have very erratic sleeping patterns, never settling down properly. Aggression is also not uncommon in cats suffering from hyperthyroidism. Affected cats tend to drink more water and urinate more frequently, and they may vomit from time to time and have loose stools. The condition of the skin may change, becoming more unkempt and developing bald patches or oiliness. Not all symptoms are easily observed by the owner and some symptoms will only be picked up during an examination by the veterinarian. These signs include heart murmurs, increased heart rate, increased respiratory rate and high blood pressure.

All these symptoms are as a result of the increased rate of metabolism in the body. If left untreated hyperthyroidism may lead to death. The organs most severely affected are the heart and the kidneys. Hyperthyroidism increases the heart rate and in later stages it causes a gallop rhythm and eventually leads to an increase in the thickness of the walls of the heart. If the patient gets treatment early enough most of these heart changes can be reversed. It is quite common for normal older cats to have some degree of kidney dysfunction. With hyperthyroidism there is an increase in blood pressure which in turn actually supports kidney function, hiding the fact that the cat may actually suffer from kidney failure. The problem comes in when the patient receives treatment for hyperthyroidism. With successful treatment the blood pressure will return to normal, thus not supporting the kidneys anymore. This means the cat may now go into full blown kidney failure which may be life-threatening.

In some cases cats become lethargic instead of hyperactive, and lose their appetite. These cases are usually in the more advanced stages of the disease, and often have underlying disease processes going on simultaneously. For this reason it can be very difficult to make a diagnosis of hyperthyroidism and the vet may need to run extensive tests to accurately diagnose the condition. When your cat is taken to the vet, a thorough clinical exam will be done first. The vet may be able to feel that the glands are enlarged by running his or her fingers down the neck. This, together with the presenting clinical symptoms will indicate whether further tests including a blood sample sent to the laboratory for determining the free T4 level will be required. A full blood count and organ function tests may be required in order to assess the general health of the patient where any other underlying or concurrent disease may also be suspected. A high total T4, together with the described clinical symptoms, are usually enough to confirm the diagnosis. Some cases may not be as straight forward to diagnose and more advanced testing may need to be done.

What actually initiates the growth of the thyroid gland is still unknown, but there are a couple of risk factors that have been identified. The iodine concentration in pet foods is extremely variable, and high doses of iodine can over stimulate thyroid function. An environmental contaminant called BPDEs have been found in large concentrations in fish and therefore also in fish based cat food and a definite link has been found between this contaminant and hyperthyroidism. Other environmental and industrial contaminants, pollutants and even genetic mutations have been implicated.

Once the patient is diagnosed, the vet will discuss treatment options with the owner. Certain prescription diet foods which the vet may recommend and prescribe contain very little iodine. Due to the fact that the thyroid gland needs iodine to function, the production of T4 will be decreased when the pet is on a low iodine diet. Even though there has been a great response in some patients where a low iodine diet has been prescribed, there are mixed opinions about this approach as a treatment option. It is important to realise that the cat should not be allowed to eat anything else whilst on this diet and healthy cats should not be allowed to eat prescription diets with very low levels of iodine. This makes it very difficult to manage in a multi cat household. Other treatment options are medical management and surgical removal of the gland. There are some definite disadvantages to medical management. The medication that is currently recommended is Methimazole or Carbimazole. Some patients do not tolerate the medication at all and will show symptoms like vomiting and anorexia. Methimazole needs to be dosed twice daily, sometimes even three times daily and it is extremely bitter. Most cats will not tolerate this well at all. The oral paste form of Methimazole may be tolerated better, but there needs to be consistency when making up the paste.

Surgical removal of the gland is very effective in the hands of an experienced surgeon. The biggest risk with surgery is that the parathyroid glands may be damaged during surgery. The parathyroid glands lie closely associated with the thyroid glands and is responsible for maintaining stable blood calcium levels. Due to the risk of damaging the parathyroid glands, the surgery will often be done in two stages approximately 8 weeks apart so that there are no major shocks to the body’s calcium balance.

Some cats may be too sick and not stable enough to undergo surgery and the anesthesia required to do the surgery can be a significant risk as a large percentage of hyperthyroid cats are in variable stages of kidney failure. In such cases, medical treatment cannot be initiated until the cat is better and the anesthetic risk is lower. By starting the cat on medication the true state of the kidneys can also be assessed first, and a better prognosis can be given to the owners. If the glands are surgically removed the cat will have to receive hormone replacement for the rest of its life as the body still needs the hormone to maintain normal body functions.

Radioactive iodine (I 131) therapy has been advocated as a safe and effective cure for hyperthyroidism but unfortunately this treatment is usually only available at University Veterinary Referral centers.